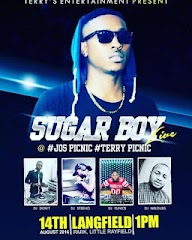 The city of Jos and entire Plateau State will never be the same again as Terry Entertainment comes to town with an action-packed outdoor event titled the ‘Mega Picnic ’. The event slated for Sunday August 14, 2016 will no doubt celebrate life, love, peace while also showcasing the inexhaustible talents that abound in the plateau.

The event which is packaged by

a promotion company called Terry Entertainment is saddled with the task and responsibility of harnessing, nurturing and promoting creative minds who are in dire need of visibility platforms to express themselves and to showcase the talents they have in and around Jos. The brain behind this event is Terry Jankada

A young man burdened with a burning passion for the Nigerian Entertainment industry with particular emphasis on the youths.

His passion for entertainment has taken him to a point where he wants to really in flu en ce the youths of this generation positively hence, his motive of setting up Terry Entertainment in the first place, an outfit dedicated to promoting the much needed peace that used to be enjoyed in the plateau long before now. Speaking about this event, Terry Jankada said
‘’This event is aimed at giving the youths in Jos a chance to show the world the talents they have. It’s a platform for them to show the stuff they are really made off. I must say this is dear to my heart and I look forward to seeing a lot of youths this Sunday at the venue. It is also my way of promoting peace in the plateau, you will agree with me that Jos is no longer that safe place it used to be but we are hopeful peace will return to the plateau in full measure once again’’.

Terry Entertainment will be hosting different mega shows this year such as: picnics, pageants, fashion shows, music concerts, comedy shows and other aspects of enentertainment.
Source;http://www.lindaikejisblog.com/2016/08/terry-entertainments-mega-show-to-light.html?m=1